Google has confirmed with Search Engine Land that it is doing away with the Q&A on Google search feature. This launched initially in India for searchers there in 2019 and now Google is telling those who submitted questions or answers that it will be going away.

What is going away is the ability for users in Google search to contribute answers directly to those questions but Question Hub is not going away.

The notice. @ujeshkrishnan[3] shared a screenshot of the notice he received from Google about this going away, here is that screenshot:

Impacting India. Google told us that this feature was only available in India for a select set of topics. Again, this is not impacting the overall Question Hub feature according to Google. Google said that users who submitted answers were notified so they can download their contributions via Google Takeout[4].

What it looked like. Here is a screenshot[5] I posted in 2019 of the Q&A on Google feature, but the user interface has changed over the years.

Why we care. This was a popular feature for India based Google Search users. I believe this grew into what we now call the Question Hub, which is a great source of content ideas for publishers. That being said, Google is constantly testing new features, and adapting those features based on how searchers use them. Since the Google Question Hub is not going away, I suspect some of the Q&A on Google might be replaced with the Question Hub functionality. 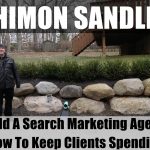