Google is the company in the strongest position to capitalize on the massive online-to-offline (O2O) economy. I discussed Google’s dominant position linking the digital and physical worlds, Google My Business’ evolution and the future of local search as a more distributed phenomenon in my SMX Next [1] keynote last week.

Nearly every ‘enterprise’ is a local business. The term “local business” is often misunderstood and typically conjures up images of mom and pop stores and very small businesses. But any business that transacts offline or sells products and services in a physical place is effectively a local business. The logos below are just as much local businesses as are small merchants. That’s because the majority of their transactions happen in the physical world (COVID-19 is changing that but more in a minute).

National and global brands that are ‘local businesses’

Online-influence offline spending. Most marketers have heard a statement that goes something like this: “roughly 80% of U.S. disposable income is spent within 10 to 20 miles of home.” It turns out this is common sense but not grounded in any single dataset or study. One could do an in-depth analysis of U.S. consumer spending data and you’d probably get to the same conclusion. But it’s largely apocryphal.

However in 2017, Access Development conducted a survey [2] that found , “more than 90% of consumers make most of their purchases within 15 minutes of home or work.” This includes things like fuel, groceries, food, personal care, home and garden, entertainment and retail shopping.

The COVID lockdowns have forced more of those purchases online and e-commerce has grown [3] by triple digits in many categories. E-commerce spending in the U.S. in 2019 was about $600 billion. But the amount of consumer spending influenced or affected in some way by the internet is roughly 20 times larger than that.

ROBO and BOPIS. U.S. GDP was about $21 trillion in 2019 (it will be less this year). Roughly 70% of that is driven by consumer spending [4] . According to multiple studies, roughly 81% of all U.S. adults (90% of internet users) conduct online research before buying things locally. That includes product research, phone and address lookups, consulting reviews and so on. That suggests that about $12 trillion of the $21 trillion in U.S. economic activity is touched in some way or directly influenced by the internet. This behavior is often called “ROBO” or “ROPO”: research online, buy/purchase offline.

The coronavirus is solidifying online shopping behaviors as well as bringing new buyers online. In the first quarter of 2020, Target said it saw five million new Target.com shoppers. But 40% of those people are buying online and picking up in the store or at curbside. BestBuy, during the same period, reported 250% e-commerce growth with 50% of those orders picked up at the local store. This “BOPIS” hybrid model is going to be increasingly prevalent and retailers that can do it well will prevail accordingly.

But it’s not just a place to look for store hours or contact information. Google Maps can address the “full funnel” — from discovery to consideration and transactions. Over the past several years Google has increasingly added conversion tools to Maps: booking/reservations, requests for quotes, food ordering and messaging [5] . These transactional tools solve multiple problems:

Google does monetize some transactions on the platform but most of its revenue still comes from PPC ads. Acquiring and retaining SMB advertisers has been costly and challenging for Google over the years. SaaS subscription fees offer an intriguing potential answer to that challenge. I had thought that virtual agent CallJoy was a premium-services model for Google; however it’s being shut down [6] . Still, G Suite is an example [7] of a successful SMB SaaS product that could spawn more such offerings in the future.

Looking ahead. The future of local search is a much more diversified and distributed experience than its past. Beyond the traditional text query in a box, it involves more visual content, augmented reality [8] (AR) and voice. Tools like Google Lens [9] or “search by photos” and image search enable consumers to use different inputs to access information and shop. And AR will factor more prominently in local search over time, as more digital content gets overlaid on the real world.

Finally, voice becomes the primary UI for new devices and categories, from virtual assistant-powered smart-home hardware to in-car systems. It’s not always about “search” but it often is. And behind it all is machine learning and, increasingly, artificial intelligence.

In short, the digital and physical worlds are becoming increasingly integrated and Google has inserted itself as a central mediator of those experiences — the commercial value of which many times greater than e-commerce — with a growing emphasis on task completion and transactions.

How to watch my presentation.  To watch the full keynote and all of the other sessions from SMX Next,  register here [10] . 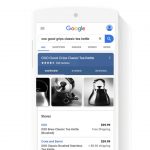